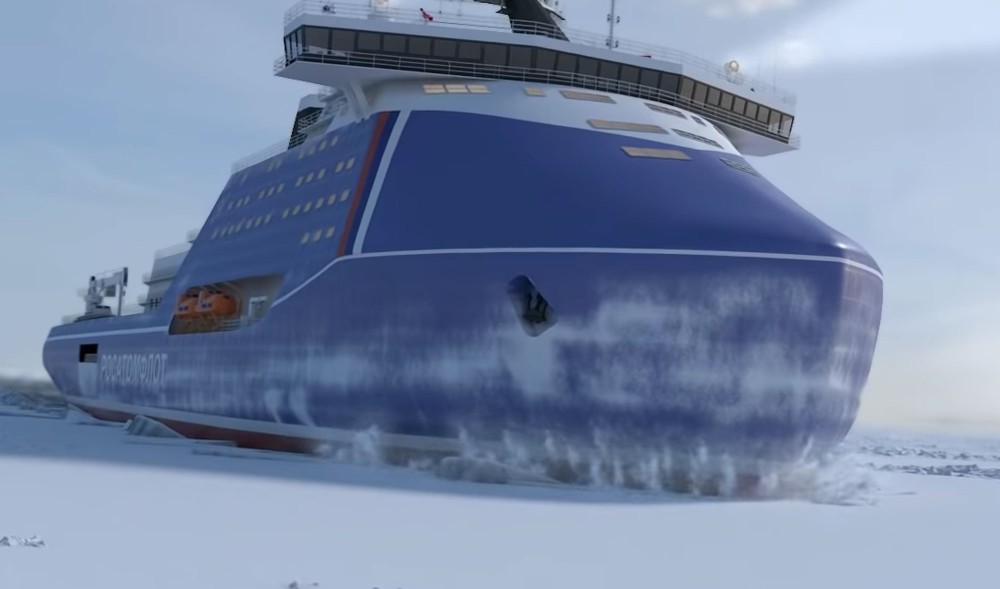 The Lider-class vessel would be about twice as powerful as the generation of nuclear icebreakers currently being built, and would help allow year-round shipping on the Northern Sea Route.

Russia has plans to move forward with construction a new massive nuclear-powered icebreaker. (Rosatomflot illustration via The Independent Barents Observer)

Last year, the Kremlin decreed that shipping along the Northern Sea Route should reach 80 million tons per year by 2024, and the easiest way to reach such huge amount is to boost export of oil, gas and other minerals.

However, Russia’s current and next generation fleet of nuclear powered icebreakers will not be sufficient to secure winter voyages by LNG tankers on the eastern part of the Northern Sea Route, from Yamal to the Pacific.

Consequently, the much wider and more powerful “Lider” icebreaker is required.

According to Borisov, the Zvezda shipyard in Bolshoi Kamen in the Far East will be upgraded with docking facility for building the enormous vessel. Rosneft will be in charge of the shipyard reconstruction in a consortium with Rosneftgaz and Gazprombank.

The same shipyard is supposed to facilitate for construction of other ice-classed vessels to support Russia’s Arctic shipping, like oil tankers, gas carriers, drilling platforms and supply vessels, TASS reports.

Mikhail Grigoriev is an expert on shipping and logistics in Russia’s Arctic region. Speaking with the Barents Observer at the Arctic Frontiers conference in Tromsø in January, Grigoriev said the main driver for Northern Sea Route development is not transit voyages with cargo between Europe and Asia.

“Development of mineral resources is the main incentive motive of development of Arctic shipping for Russia,” Grigoriev explained.

He says transit navigation could come as a result of LNG shipping.

“Creation of a system of transportation of LNG from the Kara Sea [Yamal and Ob Bay] to the Bering Sea on the sector of the Northern Sea Route within expanded or year-round navigation will allow to create the regular system of escort of transit and coasting vessels as part of caravans,” Grigoriev elaborated.

Until then, he argues, “transit voyages, both internal and international, will have irregular character and are limited on freight traffic volume.”

At a panel debate about Arctic shipping arranged by the Bellona Foundation in Norway, Director of Russia’s Northern Sea Route Directorate, Vyacheslav Ruksha, said that two additional 60 MW nuclear icebreakers of the universal LK-60Ya class (Project 22220) will be built.

“Decision to build fourth and fifth universal atomic icebreakers was adopted at the meeting headed by Prime Minister Dmitry Medvedev on 28th of November 2018 in St. Petersburg,” Ruksha said.

The LK-60Ya class is 32 meters shorter than the Lider-class and is about half as powerful.

The two icebreakers are similar to the three currently under construction at the Baltic yard in St. Petersburg. The three, named “Arktika,” “Sibir” and “Ural” will be commissioned in the period from next year until 2021-2022.

LNG counts for half of all cargo

Ruksha elaborated on how to reach the 80 million tons of Northern Sea Route Cargo by 2024.

His overview clearly shows that export of LNG from Yamal and Ob Bay will be bring the single largest boost to Arctic shipping in the years to come.

The biggest growth in demand for LNG will come from countries like Japan, South Korea and China. The Yamalmax LNG carriers would be able to sail east from the Kara Sea faster during wintertime if the 47-meter beam Lider icebreakers could crush the ice in front.

Powered by two nuclear reactors, the 120 MW Lider icebreakers could easily crush up to four-meter thick ice at 12 knots speed with unlimited range.

Novatek operates Yamal LNG with shipping from the port of Sabetta.